“Which personal style should managers adopt to ensure success? What is the most effective approach to managing the work of subordinates? These questions have been extensively researched and debated over the last century and while the consensus has moved away from ‘command and control’ management and leadership towards more consultative and participative approaches, there is no single ideal; as the best approach, may vary per circumstances and individual characteristics (CMI, 2013)”.

It is hard to say which of the management styles is more efficient as they vary from one another. The difference between leadership and management has resulted in an on-going debate over the years. The two approaches may have a different importance but also a common feature of which should do managing people. However, both management and leadership are involved in the leading positions in organisations which are designed at accomplishing individual and organisational success (Maccoby, 2000). Per Rost (1991), management involves the authority relationships between managers and the team while leadership is dependent on the multidirectional influence relationship between the leader and the group. Rost also suggested that managers may be good leaders only if they are influential.

Mostly, the similarity between leadership and management is clear enough (Northouse, 2013). Both approaches involve influence, how to work with people and the effective accomplishment of goals. Kotter (1990) and other scholars also proposed that both leadership and management are diverse concepts. Basically, managing means accomplishing activities and routines being mastered whereas leading involves influencing others to make a vision for transformation. Bennis and Nanus (1985) quoted that “managers are people who do things right and leaders are people who do the right thing”. 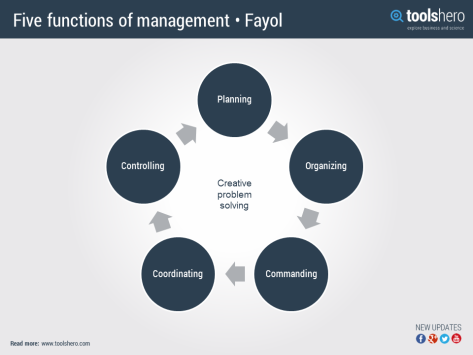 The principle functions of management which was proposed by Fayol in 1916, were planning, organizing, commanding, coordinating and controlling. Nevertheless, these functions have resulted in disagreements over the years for describing managerial work (Stephen et al. 1984). These functions which have been described as ‘folklore’ specified that formulations are not necessarily dependent on the research work (Mintzberg, 1975). Even though the Fayol functions can be implemented in some organisations, rapid variations in the 21st century will be a stumbling block. These factors may be participation of employees, decision making and absence of attention concerned with sensitivity of human needs.

Consequently, the situational approach in my opinion is the most effective approach to managing the work of subordinates. Hersey and Blanchard (in 1969) established this approach based on the 3-D management style theory proposed by Reddin (in 1967). This model stresses that both directive and supportive dimensions are necessary in leadership. It recommended that leaders should be considerate on the level to which they are directive or supportive to meet the varying needs of subordinates. The situational leadership approach suggests that leaders balance their management style to the capability and obligation of the subordinates.

Therefore, it is essential for organisations to know that both good management and leadership styles contribute to their long-term success. Based on the discussion about the different managerial and leadership styles, it can be said that no style is perfectly suitable. Yet, the styles or approaches may be effective depending on the situation. The most effective style is largely reliant on communication between the employees, the situation of the work and the behaviour of manager (Pride et a. 2014).

As suggested by the Chartered Management Institute (CMI) in 2013, there is no single best approach to managing teams. In agreement to the statement, an effective leader should be able to identify the wants of his employees and try to adjust his leadership style to meet the needs of the employees.

An example of a leader who leads his subordinates well is the CEO of Shell Ben Van Beurden, who led by combining both authoritative and democratic system. Van Beurden prevented the company from possible financial losses and ensured a 5% annual net profit largely because of his broad knowledge about the oil industry. Employees in Shell regard him highly for his part in keeping a positive subordinates’ atmosphere within the company by participating greatly in the company’s activities (Rigzone, 2014). As a team member, I will prefer this democratic management style where the leaders take care of the employees.

However, there are also instances where bad leadership resulted in a negative impact. One example of bad leadership is in the fuel explosion of Williams Companies in 1986 when basic safety standards were not adhered to due to bad management (Industry Tap, 2013).

In conclusion, it is recommended that managers use the knowledge of leadership to produce better results. This could be done by establishing a good relationship with the employees, giving credit to employees when deserved, accepting feedbacks and using their unique styles for the overall good of the organisation.

This is a text widget, which allows you to add text or HTML to your sidebar. You can use them to display text, links, images, HTML, or a combination of these. Edit them in the Widget section of the Customizer.